The Global Mercury Observatory System (GMOS) is a 5-year project funded by the European Commission to establish a world-wide system for the measurement of atmospheric mercury in ambient air and precipitation samples. There are numerous “Partners” in GMOS from many countries. The coordination of the project is being done by the CNR Institute of Atmospheric Pollution Research in Rome.

The GMOS program relies heavily on the Tekran 2537B Automated Mercury Monitor coupled with the Tekran 1130 and Tekran 1135 modules to measure air mercury speciation at ground based locations and during ocean cruises. In order to support GMOS, Tekran staff helped to organize and conduct a 3-day training session on the Tekran 2537-1130-1135 Atmospheric Mercury Speciation System at the CNR site in Rome. 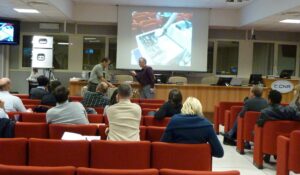 Tekran was joined by and worked side-by-side with Mark Olson of the North American Atmospheric Mercury Network (AMNet). There is a productive collaboration between AMNet and GMOS. There were 25 attendees in all from countries such as South Africa, Cape Verde, Argentina and Suriname to name a few.