Tekran provides trace-level mercury analytical and monitoring technology for a variety of applications including laboratory-based sample analysis, continuous point-source emissions and ambient air monitoring. This article focuses on and highlights the results of an application of Tekran’s Ambient Air Mercury Speciation System.

In contrast to most other heavy metals, mercury (Hg) and mercury compounds in the environment exhibit exceptional behaviors including methylation, volatilization and biomagnification. Since mercury is a potent neurotoxin, it is the latter which has spawned particular interest in understanding its production,
transport, speciation and fate.

Mercury is emitted into the atmosphere from natural (e.g. volcanic activity) as well as anthropogenic sources (e.g. combustion processes). It is generally accepted that anthropogenic sources of mercury have surpassed natural sources; a trend which may continue with the world-wide increase in coal burning for electric power generating units. Thus, the incentives for additional measurements of atmospheric mercury and the attendant understanding of its transport, conversion and fate, are clear. 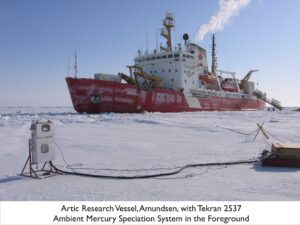 Using Tekran’s Model 2537 and speciation modules 1130 and 1135, American and Canadian researchers have determined that there are exceptionally high levels of gaseous oxidized mercury (a.k.a. RGM) and particulate-bound mercury in the Arctic. A synthesis of Arctic atmospheric mercury speciation measurements made in 5 countries and the linkages to snow and water has recently been summarized. Analogous research at the German Antarctic Station, Neumayer, has revealed similar patterns, including mercury depletion events (MDE’s) after polar sunrise. The German researchers in this program enhanced their study by using the Tekran Ambient Air Mercury Speciation System aboard a research ship near Antarctica.

Just recently, compelling gaseous elemental mercury (GEM) measurements at Cape Point, South Africa were reported for the years 2007 to 2008. The Cape Point observations revealed large MDE’s at a location outside of the polar region. Also observed were pollution events that were attributed to biomass burning and industrial emissions. The article goes on to explain the observations taking into account the chemistry of the marine boundary layer and transport from the continent. One specific conclusion suggests that the residence time of GEM in the marine boundary layer could be much shorter than current estimates.